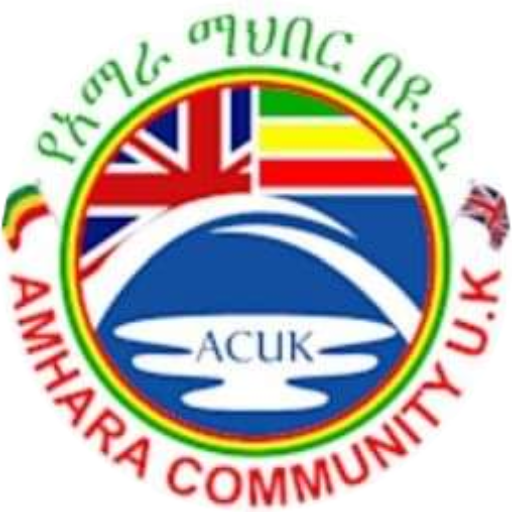 Amhara Community in United Kingdom (ACUK) was established on May 25, 2019 in response to a series of very alarming events involving slaughtering of innocent Amharas en-masse across Ethiopia over the past thirty years and particularly the last four years. The founding members of ACUK comprise Amharas who are residing in the United Kingdom.

It has accomplished substantial work on human rights in Ethiopia in general and the Amhara population in particular since it was established. It has organized multiple public awareness meetings and demonstrations to denounce the ongoing Amhara people disenfranchisement and gross human rights violations over the last 30 years in Ethiopia. We also wrote multiple letters to international organizations, medias, human right organizations and governments including the United Kingdom appealing to stop the Amhara genocide in Ethiopia.

Since 1991 when the Tigray People Liberation Front (TPLF), the precursor of present government, came to power camouflaged as Ethiopian People’s Revolutionary Democratic Front (EPRDF) Ethiopia has been ruled by a constitution that gave prominence to ethnic identity than citizenship. This was done without the consent and will of the Ethiopian People. Having considered only an ethnic identity into account, TPLF-EPRDF reconstituted Ethiopia as an ethnic federation.

The then ruling EPRDF steered by the TPLF, engendered the country to disintegration by intentionally perpetrating inter-ethnic carnages mainly targeting the Amhara ethnic group whose existence has been imperiled. Today, the EPRDF renamed itself Prosperity Party, and is still in charge of the government. It continues to use the same undemocratic and un- amended constitution, which was imposed without the ratification of the Ethiopian People. The proclaimed “reform” in 2018 only removed TPLF from the political and military power and replaced it with Oromo Prosperity Party. Many of the original “founding fathers” of the constitution and other sister parties stayed in power, now under a different nomenclature but with the same political ideology. As a result, similar atrocities have been perpetrated by the Oromo extremist groups who received coverage and support from the incumbent regime in power to gain political upper hand in the country. For instance, on Sunday September 16, 2018 massacre carried out by the “Qeerroo”, the Oromo youth extremist who had murdered thousands of non-Oromo speaking men, women, and children in the suburbs of Addis Ababa – majority of them in towns of Burayu, Keta, Asko, and Ashewa Meda [Series of Massacre].

To institutionalize and legitimize the Amhara ethnic massacre, Chapter 4, Article 47 of the Ethiopian Constitution identifies 9 ethnic based states. In accordance with this provision, regional states were created with their own local exclusionist constitutions that deny recognition for people from other ethnic backgrounds from exercising any democratic and human rights outside their ethnic region by asserting some ethnic groups are “natives” and owners of the region – and others like ethnic Amharas and Gurages that are disbursed throughout the country considered and treated as “settlers, who have no right” and be evicted. [Aspects of the discriminatory constitution]

Moreover, both federal and regional governments issued identity cards with ethnicity listed as a key identifier. This made it very easy to exclude the Amhara and other specific ethnic groups from holding any political office thereby denying them the opportunity to have political representation and any economic activities in regions they reside. Sadly, this identifier is being used as an item on the checklist of ultra-national extremists to exterminate the Amhara ethnic group and other minorities living outside of their designated regions.

While the world focuses on the crises in Tigray, a much more systemic and devastating ethnic cleansing is on the run throughout Ethiopia targeting the Amharas. TPLF forces have carried out atrocities that amount to genocide in multiple Amhara region areas they invaded during the war while the Oromo liberation front (OLF) armies named by government as ‘Shene’ continued carrying out massacre and ethnic cleansing in the Oromia region against ethnic Amharas [AMNESTY International Report].

The Amhara massacre is continuing unabated. The most recent massacre against innocent Amhara civilians was carried out on 18/06/2022 by Oromo extremist militias known as OLF Shene in West Wolega zone, Gimbi district. More than 1500 Amharas were murdered in broad daylight.[International Source; The Guardian, BBC , REUTERS , U.S DEPARTMENT of STATE and recent Massacre]

The massive killings and displacements that the Amharas are experiencing is institutionalized as evidences are mounting that show it is supported by government structure. Many are equating it with the pre-genocidal attributes between Tutsi and Hutu in Rwanda. Nonetheless, the world has refused to pay attention same way it did in the case of Rwanda (News: Benishangul Gumuz region ruling party admits ethnic targeted killings in Metekel, issues an apology & sacks senior members – Addis Standard).

The pattern we have seen from the ethnic cleansing attacks both in the Benishangul Gumuz Region and the Western Oromia Region of the country is that Amharas are not just unwanted there, but they do not want them to leave alive as well. We have repeatedly received information that amounts to the attackers giving directions that none of the Amharas leave the location alive. This is because they know any displaced resident might legally request to be repatriated when relative peace and calm returns to the area. However, due to radical ethno-nationalists’ sole mission of ethnically homogenizing these areas where they commit horrific atrocities against humanity, they prefer that no one who is accustomed to the area is left alive. This has been proven by their calculated and coordinated effort to chase stop and kill Amharas who are fleeing the area using public buses and other means of transport. It came to a point where leaving such hotspot ethnic cleansing area became so dangerous that traffickers now get paid a lot of money to be able to leave these areas.

The Visions And Goals Of ACUK