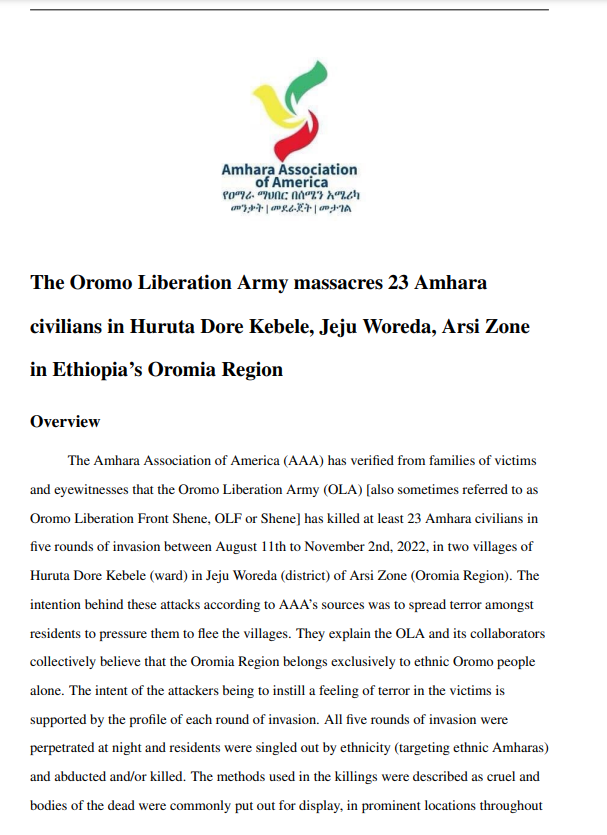 The Amhara Association of America (AAA) has verified from families of victims and eyewitnesses that the Oromo Liberation Army (OLA) [also sometimes referred to as Oromo Liberation Front Shene, OLF or Shene] has killed at least 23 Amhara civilians in five rounds of invasion between August 11th to November 2nd, 2022, in two villages of Huruta Dore Kebele (ward) in Jeju Woreda (district) of Arsi Zone (Oromia Region).

The intention behind these attacks according to AAA’s sources was to spread terror amongst residents to pressure them to flee the villages. They explain the OLA and its collaborators collectively believe that the Oromia Region belongs exclusively to ethnic Oromo people alone. The intent of the attackers being to instill a feeling of terror in the victims is supported by the profile of each round of invasion.

All five rounds of invasion were perpetrated at night and residents were singled out by ethnicity (targeting ethnic Amharas) and abducted and/or killed. The methods used in the killings were described as cruel and bodies of the dead were commonly put out for display, in prominent locations throughout the villages so that residents could see them when they awoke in the morning. Following the attacks, hundreds of Amharas have continued fleeing out of the town abandoning their property and harvests as intended by the militants.