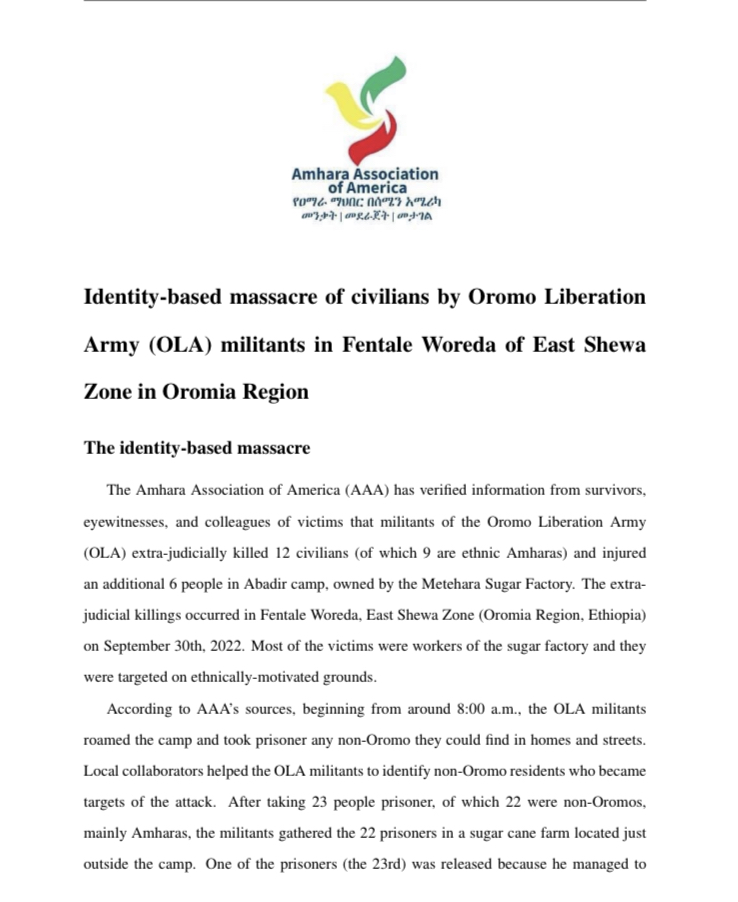 The Amhara Association of America (AAA) has verified information from survivors, eyewitnesses, and colleagues of victims that militants of the Oromo Liberation Army (OLA) extra-judicially killed 12 civilians (of which 9 are ethnic Amharas) and injured an additional 6 people in Abadir camp, owned by the Metehara Sugar Factory. The extrajudicial killings occurred in Fentale Woreda, East Shewa Zone (Oromia Region, Ethiopia) on September 30th, 2022. Most of the victims were workers of the sugar factory and they were targeted on ethnically-motivated grounds.

According to AAA’s sources, beginning from around 8:00 a.m., the OLA militants roamed the camp and took prisoner any non-Oromo they could find in homes and streets. Local collaborators helped the OLA militants to identify non-Oromo residents who became targets of the attack. After taking 23 people prisoner, of which 22 were non-Oromos, mainly Amharas, the militants gathered the 22 prisoners in a sugar cane farm located just outside the camp. One of the prisoners (the 23rd) was released because he managed to prove his Oromo identity. Then at around 9:00 a.m., the OLA militants opened fire on the civilians, killing 12 and injuring an additional 9.