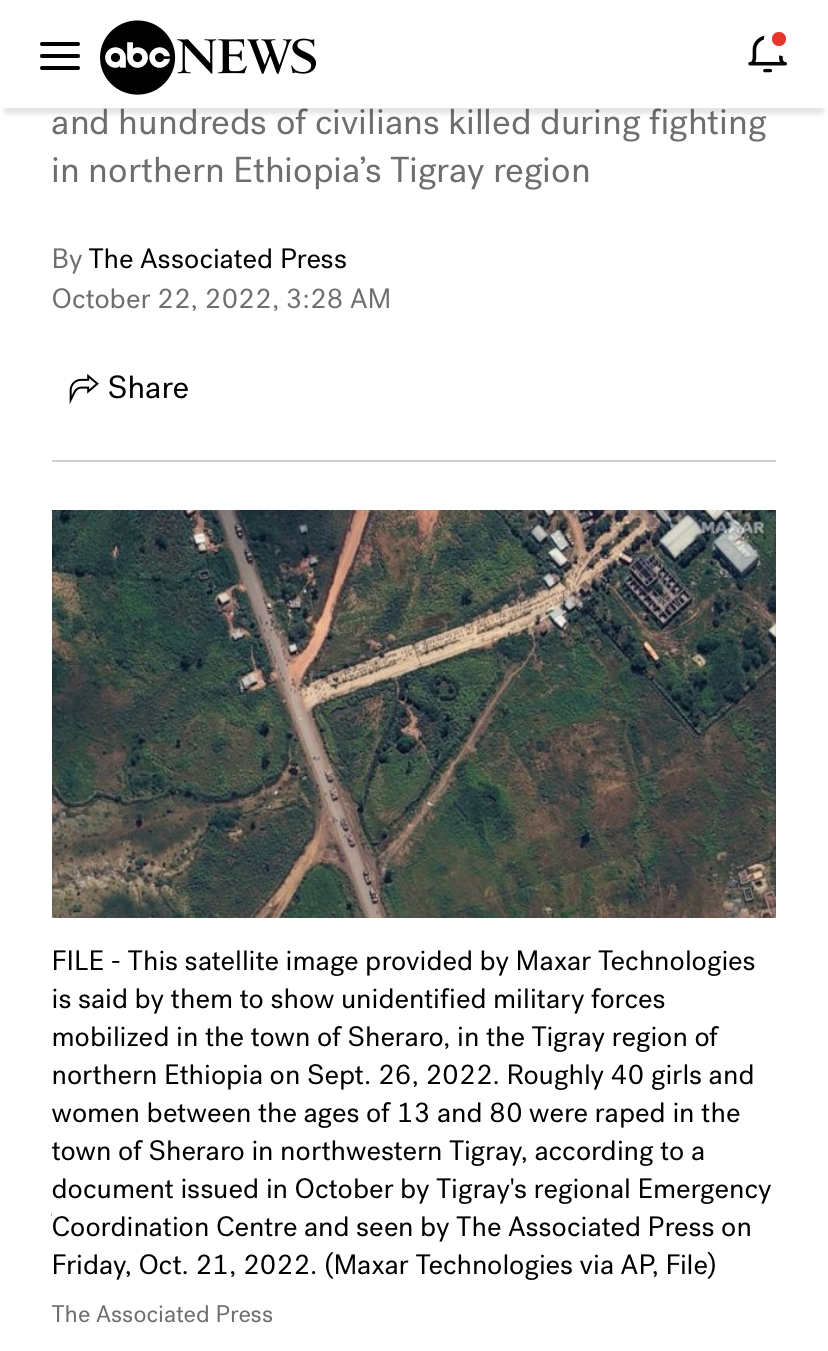 NAIROBI, Kenya — Dozens of women and girls have been raped and hundreds of civilians killed during fighting in Ethiopia’s Tigray region, according to an official document seen by The Associated Press.

Roughly 40 girls and women between the ages of 13 and 80 were raped in the town of Sheraro in northwestern Tigray, according to the document prepared by Tigray’s regional Emergency Coordination Centre. The center includes regional government bureaus, U.N. agencies and nongovernmental organizations.

The document reports eight more rapes, “including gang rape,” in the district of Tselemti, also in northwestern Tigray.

Issued Oct. 14, the document did not state who was responsible for the sexual violence. Nor did it state the time frame in which it occurred.

According to diplomatic sources, Eritrean and Ethiopian forces took control of Sheraro last month. Eritrean troops have fought alongside Ethiopia’s federal military since hostilities resumed in Tigray on Aug. 24 after a lull in fighting.

Diplomats have expressed alarm over reports of civilian casualties in the region as Ethiopia’s federal military this week took control of the major town of Shire and the federal government expressed its aim to capture Tigray’s airports and federal institutions.

A humanitarian worker based in Shire told the AP the town’s airport is now manned by Eritrean forces. Ethiopian and Eritrean forces have captured warehouses belonging to NGOs there, and Eritrean forces are specifically looting vehicles, according to the aid worker, who spoke on condition of anonymity because of safety fears.

U.S. officials have called on Eritrean forces to withdraw from Tigray and urged the parties to agree to an immediate cease-fire. The administrator of the U.S. Agency for International Development, Samantha Power, has described the human cost of the conflict as “staggering.”

The U.N. Security Council discussed the conflict in Ethiopia at a closed meeting Friday but didn’t issue a statement because of divisions among its 15 members.

Diplomats said Norway and the council’s three African members — Kenya, Gabon and Ghana — proposed a statement that would have expressed “grave concern” at reports of increased fighting in Tigray, called for an immediate cessation of hostilities, and urged the parties to recommit to dialogue. But Russia and China blocked its approval, the diplomats said, speaking on condition of anonymity because discussions were private.

U.S. Ambassador Linda Thomas-Greenfield in a statement called the lack of a statement “disappointing,” citing the words of U.N. Secretary-General Antonio Guterres when he said this week that the situation in Ethiopia “is spiraling out of control.”

“In the past week alone, we’ve seen a serious uptick in fighting and violence,” her statement said. “The scale of the fighting and deaths rival what we’re seeing in Ukraine, and innocent civilians are being caught in the crossfire.”

The internal document seen by the AP said 159 individuals have been shot dead in the Tahtay Adiyabo, Dedebit and Tselemti areas of northwestern Tigray, adding that others were maimed by gunshots and shelling.

A further 157 people were “taken by Eritrean forces” in Tselemti, Dedebit and Sheraro, according to the document, which said there is “no information (on their) whereabouts.”

The latest fighting has halted aid deliveries to Tigray, where around 5 million people need humanitarian help. A lack of fuel and a communications blackout are hindering the distribution of aid supplies that were already in the region.

The U.S. is “fully and actively engaged in diplomatic efforts at the highest levels of our government to support the African Union,” Thomas-Greenfield said in her statement.

Speaking in the federal capital, Addis Ababa, Prime Minister Abiy Ahmed said Thursday that the war will “conclude” and “we will not be continuing with the fighting forever,” adding that he hopes for the day when Ethiopians work together for the prosperity of people in Tigray.

Tigray’s fugitive authorities are yet to confirm their attendance but have previously committed to participating in talks mediated by the African Union. The Tigray-based Tigrai TV aired footage Friday that appeared to show the release of thousands of prisoners of war by Tigray authorities ahead of the expected start of peace talks next week.

A World Food Program spokesperson told the AP that “an armed group” entered its warehouse in Shire on Oct. 18, a day after Ethiopia’s federal government announced the town’s capture.

“WFP is actively working to confirm if the armed individuals remain and if any humanitarian stocks or assets have been taken or damaged,” the spokesperson said.

All sides have been accused of atrocities since the conflict in northern Ethiopia began almost two years ago.

Last week a report by the Amhara Association of America advocacy group said the Tigray forces had killed at least 193 civilians and raped 143 women and girls since August in the Raya Kobo area of the Amhara region, which borders Tigray.

The conflict, which began nearly two years ago, has spread from Tigray into the neighboring regions of Afar and Amhara as Tigray’s leaders try to break the blockade of their region.