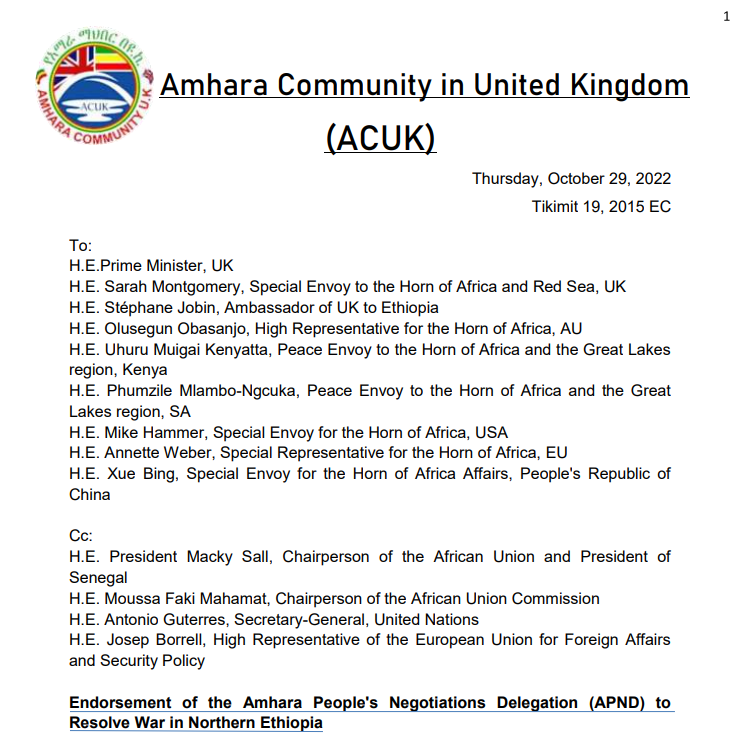 The Amhara Community in United Kingdom (ACUK) is writing this statement to express its full support and endorsement of the newly announced Amhara People’s Negotiations Delegation (APND). The ACUK in its previous statements has detailed the declining human rights situation in Ethiopia and the perils associated with war in Northern Ethiopia. ACUK has also denounced the state-sanctioned genocide against Amhara people which has intensified since Prime Minister Abiy Ahmed Ali came to power in 2018. ACUK has always called for peace and firmly believes this can only be achieved through a process which includes Amharas, the largest community affected by the war in Northern Ethiopia. This is evidenced by ACUK being one of the signatory organizations in the August 19th, 2022 joint letter issued by 28 Amhara organizations worldwide calling for Amharas to be represented independently) in peace talks to end the war in Northern Ethiopia.

The war in Northern Ethiopia has caused immeasurable suffering to thousands of civilians from the Amhara, Afar and Tigray Regions. The damage incurred on the Amhara people over three rounds of a full-scale invasion by the Tigray People Liberation Front (TPLF) and its allies has impacted more people than any other region. This was seen in the Mai-Kadra massacre of November 2020 in which TPLF allied forces massacred 1,700 Amhara civilians and in similar identity-based massacres by the TPLF and Oromo Liberation Army (OLA) in Raya Kobo, Mersa, Chenna, Adarkay, Dessie, Gashena, Ataye, Shewa Robit, Debre Sina, Galicoma and elsewhere. And these large-scale massacres do not even include those which predated November 2020. The campaign of genocidal invasion continued when TPLF launched their third round of invasion into Amhara Region in late August 2022. The suffering of Amhara has also raged on in a genocidal siege and blockade of Amhara throughout the Oromia Region by the state-backed OLA and its collaborators.

The APND offers an opportunity for Amhara to be part of the process to resolve the war in Northern Ethiopia and pursue justice and accountability. After all, if peace talks continue between Prosperity Party (PP) and TPLF, it is clear the result will be a power-sharing agreement similar to the one in 1991 with a tacit agreement to clear PP and TPLF of accountability for crimes committed. The 1991 arrangement led to the 1995 constitution which instituted apartheid into the nation’s fabric and ushered an era of Amhara Genocide starting from Welkait and Raya, territories forcibly occupied and annexed by the TPLF to expand their home region of Tigray. For Amhara, this is problematic because both entities are complicit in the decades-long Amhara Genocide. This includes the PP’s Amhara division which does not represent the Amhara people and has been an accessory if not fully complicit to human rights violations against Amhara under the PP and prior. During the 27 years of darkness when TPLF ruled Ethiopia. The Amhara people made this clear during region-wide protests in 2021 which squarely blamed Prime Minister Abiy Ahmed and PP for the genocide and other abuses against Amhara including those which occurred prior to the war. Overall, PP lacks the mandate, legitimacy, or acceptance to negotiate on behalf of Amhara. This is the same regime which jailed over 24,000 Amhara since the intensified mass crackdown of May 2022. Journalists, activists, opposition politicians and Fano patriots continue languishing in prison.

ACUK supports AU-mediated peace talks to end the war in Northern Ethiopia on the condition that Amhara is represented independently. We also believe that Canada can play a key role in supporting the AU’S work regarding the Northern Ethiopia conflict by implementing African-led solutions. Supporting the inclusion of the APND will promote lasting peace, and reconciliation in Ethiopia, and the Horn of Africa at large. The actors in the war and international observers can also support by pressuring the TPLF to cease all provocative military operations, for PP to immediately and unconditionally release all prisoners of conscience and for both parties to finally acknowledge the restoration of formerly annexed lands of Welkait and Raya to the administration of the Amhara Regional State. If these steps are taken, ACUK is confident the main drivers of the conflict will be addressed and the foundations for genuine talks can proceed steadily.

In closing, ACUK calls for all actors in the war and for the international community to support the inclusion of the APND to represent Amhara independently in peace talks aimed at resolving the war in Northern Ethiopia. Including Amhara is not only the logical step but crucial to achieving lasting peace and stability in Ethiopia and the greater region. Amhara constitutes one of the largest groups in Ethiopia, the largest stakeholder in the war and the community which has incurred the greatest toll in the war in many ways. Therefore, any negotiated settlement, naturally, must include Amhara for there to be genuine hope for lasting peace. ACUK would like to reiterate Amhara in Ethiopia faces a multitude of challenges, from the state-sanctioned Amhara Genocide to the systemic intellectual genocide targeting Amhara students throughout the country. ACUK calls on international partners to work with grassroots civic organizations to support Amhara affected by violence and oppression and to promote justice and accountability for abuses against Amhara including an independent investigation into the Amhara Genocide which incorporates abuses prior to the war.

More information on the situation in Ethiopia and specifically regarding the increased targeting of Amharas across the nation:
Website: https://www.amhcouk.org
Twitter: https://twitter.com/AmharaUk