“They attacked us for the simple reason of being Amhara” 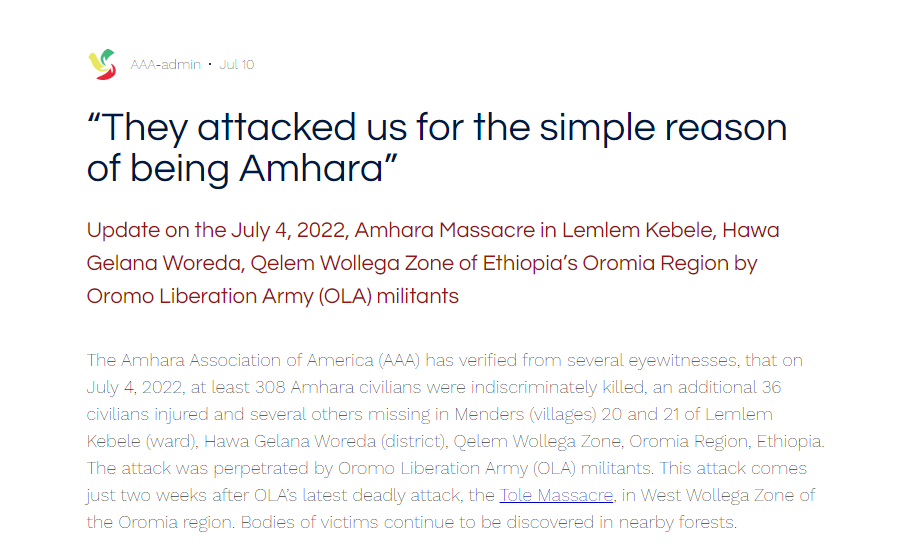 The Amhara Association of America (AAA) has verified from several eyewitnesses, that on July 4, 2022, at least 308 Amhara civilians were indiscriminately killed, an additional 36 civilians injured and several others missing in Menders (villages) 20 and 21 of Lemlem Kebele (ward), Hawa Gelana Woreda (district), Qelem Wollega Zone, Oromia Region, Ethiopia. The attack was perpetrated by Oromo Liberation Army (OLA) militants. This attack comes just two weeks after OLA’s latest deadly attack, the Tole Massacre, in West Wollega Zone of the Oromia region. Bodies of victims continue to be discovered in nearby forests.

As a result of the massacre, 14,860 Amhara residents from Menders 20 and 21 and nearby Menders 15, 17, and 18 have been displaced following the attack. These residents have primarily fled to the nearby town of Mechara. These displaced civilians are yet to be provided any form of humanitarian relief. The assailants had also engaged in widespread looting and destruction of property. Hundreds of cattle were looted, homes were destroyed and residents were robbed of their cash and material savings. The attack lasted for five hours from 6:00 am to 11:00 am. The attack happened indiscriminately targeting children,

women, elders, persons with disabilities, and non-combatant civilians. The youngest known victim is 4-month-old Hayat Aregawi Hussein and the oldest is 85-year-old Kassaw Aragie from Village 20.