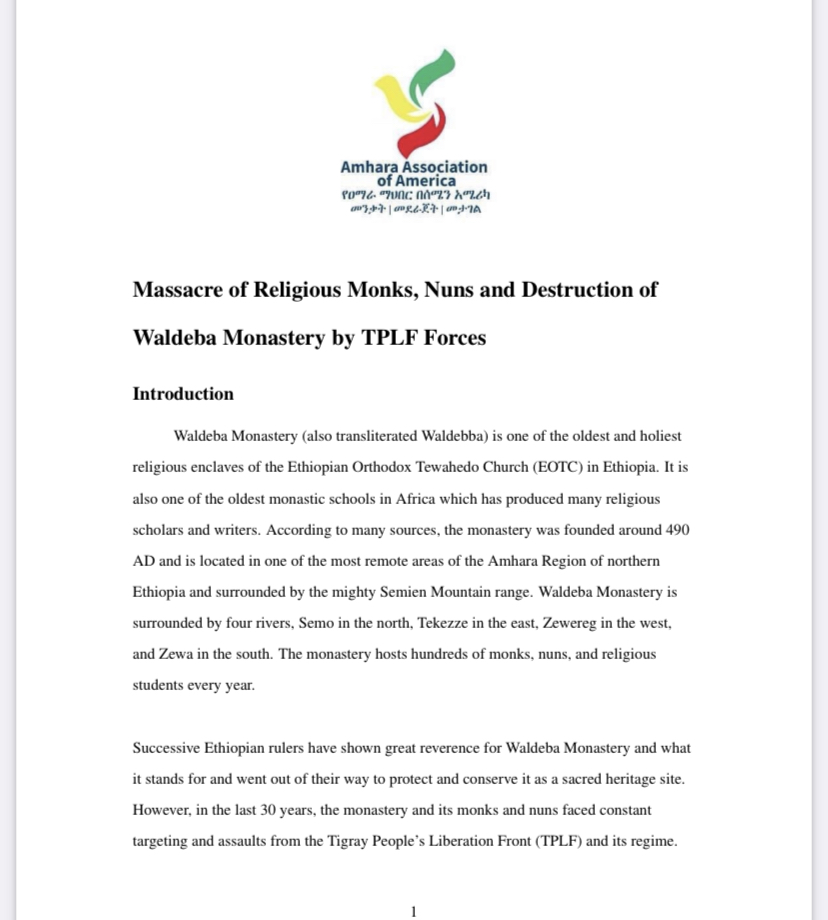 religious enclaves of the Ethiopian Orthodox Tewahedo Church (EOTC) in Ethiopia. It is

scholars and writers. According to many sources, the monastery was founded around 490 AD and is located in one of the most remote areas of the Amhara Region of northern Ethiopia and surrounded by the mighty Semien Mountain range. Waldeba Monastery is surrounded by four rivers, Semo in the north, Tekezze in the east, Zewereg in the west, and Zewa in the south. The monastery hosts hundreds of monks, nuns, and religious students every year.

Successive Ethiopian rulers have shown great reverence for Waldeba Monastery and what it stands for and went out of their way to protect and conserve it as a sacred heritage site. However, in the last 30 years, the monastery and its monks and nuns faced constant targeting and assaults from the Tigray People’s Liberation Front (TPLF) and its regime.

During this period, the holy site faced numerous invasions by the TPLF. For example, in

2012, the TPLF seized the land which contained the monastery for commercial development including growing sugarcane and establishing a processing plant. TPLF had also desecrated the holy grounds by moving heavy machinery for construction of a dam for irrigation and to pave highways for transporting various products and people. The plan was to erect a sugar plantation on the holy site, against the wishes of and in great offense against local residents. Undermining the heritage and disturbing the peace and tranquility of the monks appeared to be a non issue for the TPLF but was clearly an egregious crime by any standard of civilized behavior. The TPLF regularly attacked the monks and priests which lived extremely humble and minimalist lifestyles, working day and night, and having prayers for nation-wide peace. The pattern of attacks against the monastery and against its monks and nuns continued after TPLF’s descent from central power and extended into the war in Northern Ethiopia which began in November 2020.