“Abiy Ahmed’s regime lacks the mandate, support, and standing to negotiate on behalf of Amharas at a time when Amharas are demanding his resignation” 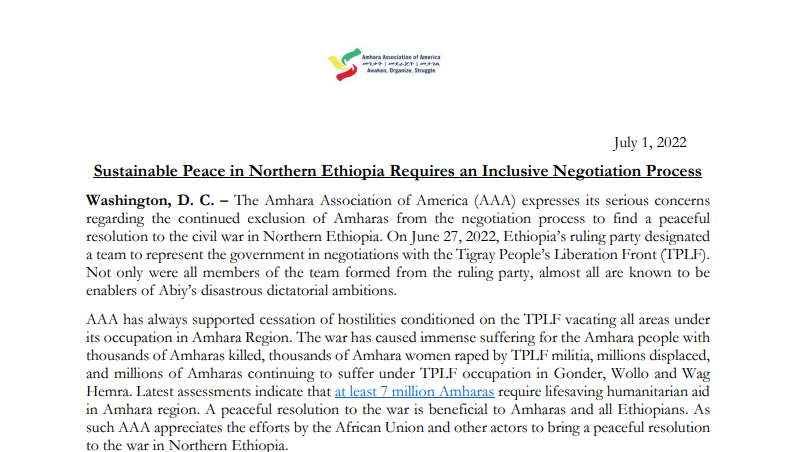 Washington, D. C. – The Amhara Association of America (AAA) expresses its serious concerns
regarding the continued exclusion of Amharas from the negotiation process to find a peaceful
resolution to the civil war in Northern Ethiopia. On June 27, 2022, Ethiopia’s ruling party designated
a team to represent the government in negotiations with the Tigray People’s Liberation Front (TPLF).
Not only were all members of the team formed from the ruling party, almost all are known to be
enablers of Abiy’s disastrous dictatorial ambitions.

AAA has always supported cessation of hostilities conditioned on the TPLF vacating all areas under
its occupation in Amhara Region. The war has caused immense suffering for the Amhara people with
thousands of Amharas killed, thousands of Amhara women raped by TPLF militia, millions displaced,
and millions of Amharas continuing to suffer under TPLF occupation in Gonder, Wollo and Wag
Hemra. Latest assessments indicate that at least 7 million Amharas require lifesaving humanitarian aid
in Amhara region. A peaceful resolution to the war is beneficial to Amharas and all Ethiopians. As
such AAA appreciates the efforts by the African Union and other actors to bring a peaceful resolution
to the war in Northern Ethiopia.

However, the negotiation process is set to fail because it continues to exclude major parties to the war
including Amhara, Afar and Eritrea. The Amhara people have an immense stake in the negotiations;
a final resolution on the disputed lands of Welkait and Raya, restitution for Amharas affected by the
war, justice for the thousands killed, raped, and millions displaced, demobilization of TPLF,
amendment to the ethnic-apartheid constitution, accountability for the crimes committed against
Amharas by the TPLF and current ruling party, and release of the nearly 13,000 Amharas in custody
by the ruling party. Amhara Fano patriots were key to turning the tide of the war by fighting bravely
against TPLF invading forces and dislodging TPLF and OLA forces from the Amhara and Afar
Regions. Sidelining independent Amharas from the negotiations will not result in achieving the
intended outcome – lasting peace.

Furthermore, Prime Minister Abiy Ahmed’s regime lacks the mandate, support, and standing to
negotiate on behalf of Amharas at a time when Amharas are demanding his resignation and
independent investigations into his complicity in enabling and/or direct involvement of the genocide
against Amharas. At the time of this writing, Abiy’s regime has jailed dozens of Amhara university
students for organizing peaceful protests against his administration at Addis Ababa University, Bahir
Dar University, Debre Markos University, and University of Gondar, among others. No credible
observer would support a government that has jailed more than 12,000 Amharas in less than a month,
mainly patriotic Fano veterans that fought against TPLF – as an acceptable delegate on behalf of
Amharas.
Should this undue process continue and Amharas lack representation through opposition parties and
civil society in the negotiations, Amharas will view the process and any outcome out of it as a power
sharing arrangement among the former coalition members of the Ethiopian Peoples’ Revolutionary
Democratic Front (EPRDF).

For Amharas, the continued exclusion from the process has immense implications and will force
Amharas to resist and fight back the regime’s oppression similar to the 2016 resistance that toppled
the TPLF from central power. Therefore, to avoid further instability and chaos to Northern Ethiopia,
AAA implores the African Union and other stakeholders to push for an inclusive dialogue of all keystakeholders and the representation of Amharas in the negotiation process to resolve the war and
bring sustainable peace to Ethiopia.

About AAA: The Amhara Association of America (AAA) is a nonprofit organization that coordinates the
advocacy efforts of Ethiopia’s Amhara diaspora in the United States to Congress, the Executive Branch, nongovernmental organizations, and international bodies. Visit www.amharaamerica.org for more information.